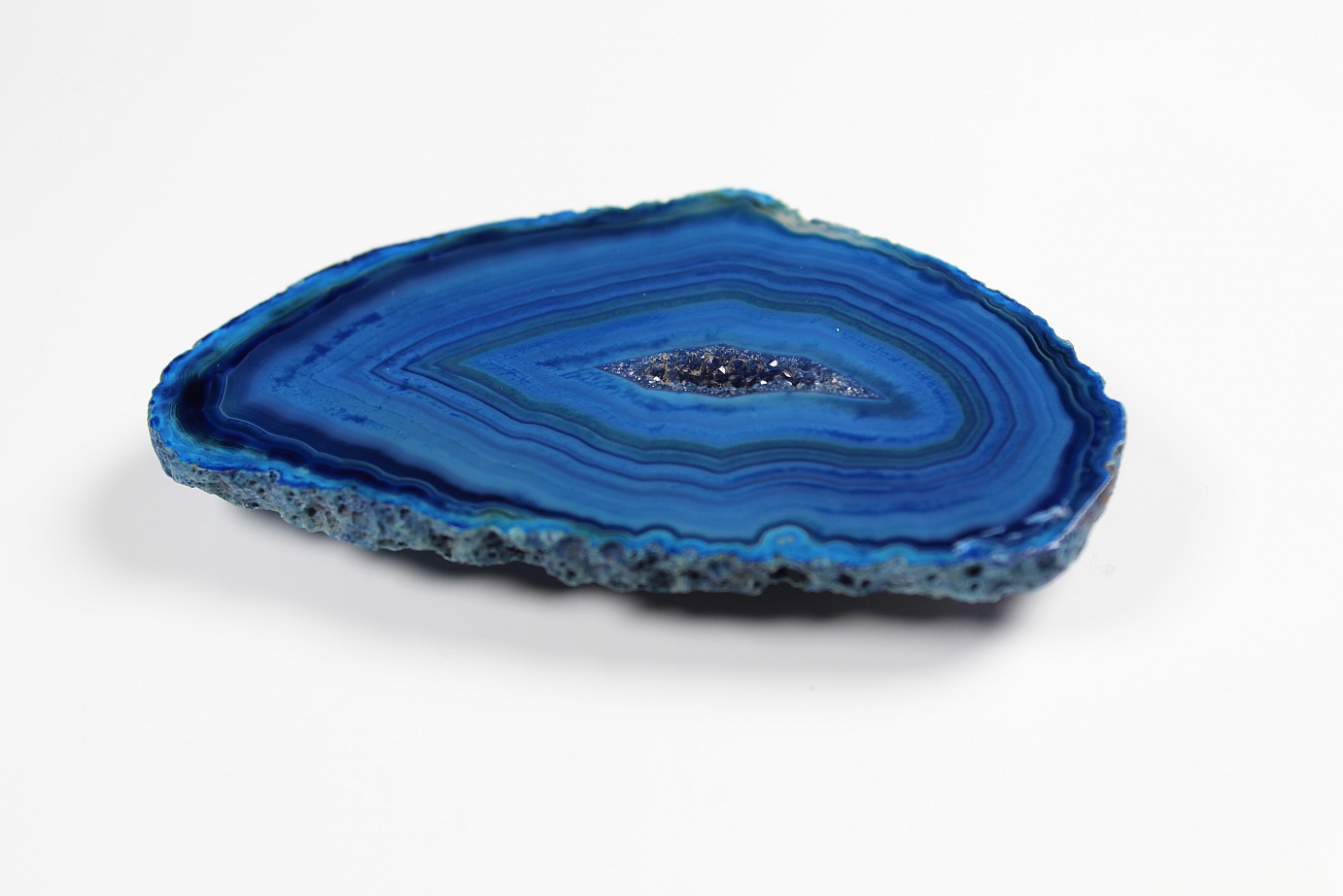 hen it comes to fighting fish diseases, there are a few weapons in our medicinal arsenal of chemicals. Many are well known, including formaldehyde, methylene blue and acriflavine. However, none are as well-known as malachite green, with its controversial past and acquired accumulation of misconceptions.

What is it used for?

Owing to its vivid colour and ability to adhere to fabrics, malachite green was traditionally used as a dye for clothing.  In the 1930s, it was subsequently discovered that it had therapeutic uses in aquatics for eradicating fish diseases, such as fungal infections and attack by the protozoan parasite, white spot (Ichthyophthirius multifiliis). Malachite green soon became a staple as a medication for these problems and a main ingredient in both ornamental and food fish aquaculture.

There’s a mineral called malachite – is this the same as malachite green?

This question is frequently asked and is probably the origin to the misconception that malachite green contains copper. Indeed, there is a decorative mineral that shares the same name and finds its way into households as ornaments. This geological mineral is made of a compound called copper carbonate, which takes on various shades of blue to green. However, the therapeutic agent malachite green contains zero copper, and the only similarity between the mineral and medicinal ingredient is in name and colour. 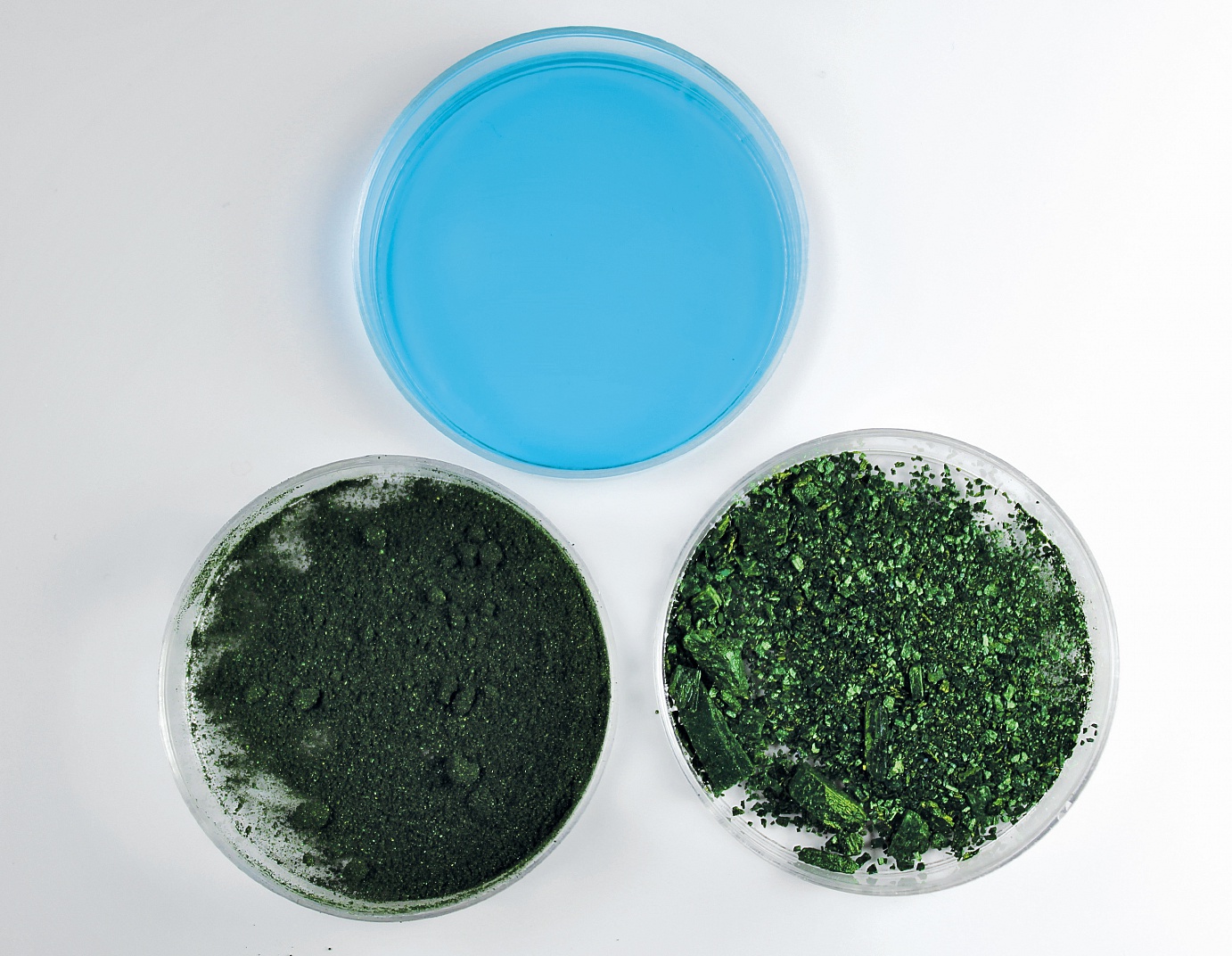 What is it made of?

Malachite green is not a naturally occurring substance, but like so many effective medicinal ingredients, it is man-made. If it were possible to see malachite green molecules with a microscope, you would see that it is made of only three types of elements: carbon, hydrogen and nitrogen. More precisely, there’s 23 carbon atoms, 25 hydrogen atoms and two nitrogen atoms.

Names for chemicals can be quite a mouthful, and malachite green is no different. It’s quite a relief that its common name is “malachite green” as the “proper” chemical name is 4-{[4-(dimethylamino)phenyl](phenyl)methylidene}-N,N-dimethylcyclohexa-2,5-dien-1-iminium! Being a dyeing agent, which have their own naming system, it is also sometimes called “Basic Green 4”.

How does it work?

Malachite green is believed to work by means of being a “metabolic poison”. Organisms rely on a plethora of enzymes and chemical reactions to achieve the ability of being alive. Malachite green is understood to interfere with these systems, making some biological processes not possible.  Malachite green is indiscriminate in this ability, but it just so happens that species of mould that cause fish fungus (typically Saprolegnia spp) and protozoans, such as white spot (Ichthyophthirius multifiliis), are more sensitive to this biological interference than fish are.

Why is malachite green controversial?

Malachite green can be, to a certain extent, described as a chameleon. Much like chameleons, it too can change its colour. With a little tweak to its chemical formula, which can happen readily in water, malachite green can change colour from its characteristic deep blue to a nearly colourless compound. This colour change is also accompanied by its ability to change from being water-soluble to fat-soluble.  This small, but subtle change, is all important as it is believed that this characteristic allows malachite green to pass through cell membranes (which are comprised of “fats”) where it can then go on to have its effect.

Since this fat-soluble form of malachite green is indiscriminate of the cells it enters, it can make its way into non-target cells, such as natural fat reserves found in fish. Here, it can reside, and it can take as much as 90 days for only half of it to leave a fish’s body. The consequence of this might not sound significant, until the following facts have been revealed…

Is it safe for me to use malachite green-based products on my aquarium/pond fish?

As long as you take care (and have no plans of consuming your fish!), the simple answer is yes. In terms of fish welfare, the risks of using malachite green-based products far outweigh the risks of leaving fish untreated. With respect to the health of the person administering the chemical, the likelihood of getting the chemical on your skin is low. Even if you do, there’s no reason to panic. It will stain your skin and may persist for the best part of the day, or if you’re unlucky, a little longer, there will likely be no long-lasting effect. To be on the safe side, and as with all medications, make sure you keep them out of reach of curious children or pets.

After adding a malachite green-based product to my aquarium/pond, the colour faded within a couple of hours.  Does that mean that the product is no longer there?

There is the often-repeated misconception that if a product is highly coloured, that when the colour fades from the water, it no longer has an effect. In some instances, this may be correct (Permanganate Dip is a true example), but in most cases, it isn’t. As we’ve p

reviously seen, malachite green is a bit of a colour-changer. Certainly, if the water remains blue after addition, we can correctly say that malachite green is present in the water. With time, the blue form does change to a colourless form, but it is this colourless form that is the most active due to its ability to enter cells.  What we tend to find is that temperature and a high pH (or higher water hardness), this change from blue to colourless happens more quickly. Unfortunately, the amount of “blue” in the water is no indication of the amount of malachite green present or its efficacy.

Is there anything else I need to know when using these products?

If you follow the instructions provided on the bottles of medication, you should be able to easily and effectively resolve the problem you’re facing. Our products that use malachite green have been formulated for the environment that it is going to be used in. For example, where only koi carp are present, our Koi Care Malachite is formulated to achieve the correct concentration that koi carp can tolerate. For aquarium use, we recognise that some aquarium fish are more sensitive to certain medications. Our Aquarium Anti-White Spot & Fungus has been formulated to deliver a low, yet continuous amount of malachite green for even sensitive species such as clown loach. If you have any doubt whether it’s okay to use a product for your fish, get in touch and we’d be more than happy to answer your questions.