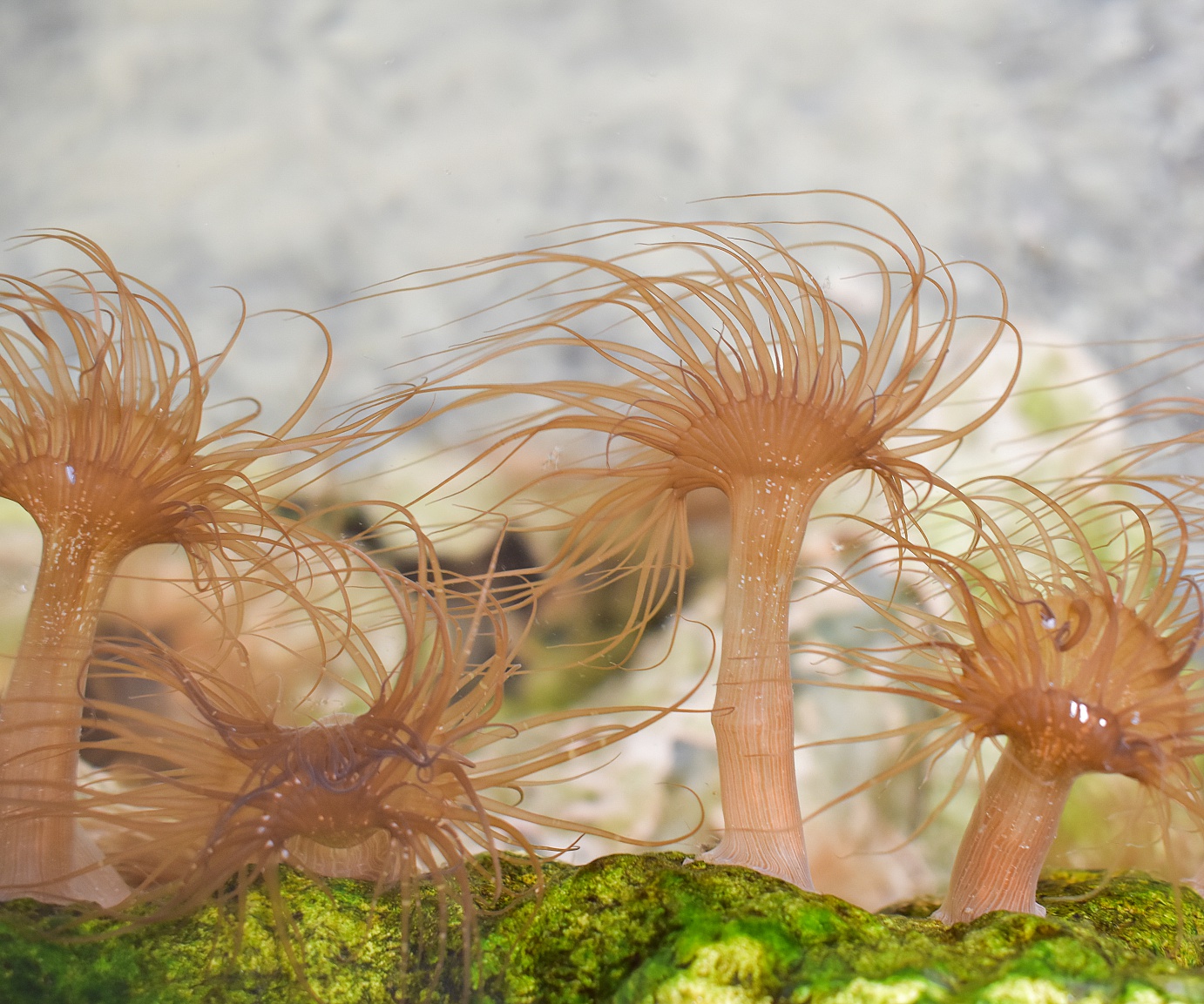 Aiptasia are a group of invertebrates in the anemone family. There are 17 different species of Aiptasia and are commonly referred to as ‘glass anemones’. They are identified by their clear or brownish colouration, a long body column and long stinging tentacles. As with all cnidarians, Aiptasia have the ability to sting their prey and neighbours. This is a major reason they are considered a pest in the home aquarium.

Aiptasia, from the greek words for “always” aei and “spead wings” petao, references their tentacles which are usually in full extension. These tentacles contain cnidocytes, miniature harpoon-like barbs containing venom to immobilise prey. Once caught, the prey is funnelled to the mouth by the tentacles and consumed whole.

All species of anemone can sting, including desirable species (bubble-tip, carpet, sebae to name a few). Most species' tentacles are smaller than Aiptasias. Shorter tentacles reduce the risk of capture or upsetting other invertebrates near them. Most Aiptasia species are too small to capture many of the popular marine fish species kept in aquariums. They do however cause irritation, increasing the risk of secondary infections. Aiptasia also cause nuisance to neighbouring corals. This can lead to corals closing. This impairs their ability to feed and their symbiotic zooxanthellae from photosynthesising.

Aiptasia are classified as a pest species as they are generally not wanted in the aquarium. They tend to hitch hike on live rock. Once introduced, Aiptasia quickly replicates both asexually and by sexual reproduction. Asexual reproduction is more common and occurs when a segment is removed from the parent body. This remnant establishes itself as a new polyp, usually within 14 days. This is why physical removal of Aiptasia is not advised. Pulling an Aiptasia from the rock will usually leave part of it behind. Studies show Aiptasia only needs a single cell to grow into a new polyp! Sexual reproduction is less common and involves free floating gametes released into the water. The mass fertilised larvae then settle and develop into new polyps. Mass colonisation of Aiptasia in the aquarium would suggest sexual reproduction has occurred.

There are various options on how to control Aiptasia at home. Some marine keepers prefer to find a natural solution to keeping Aiptasia at bay. There are a few species of fish and invertebrates that eat Aiptasia. The Peppermint Shrimp (Lysmata wurdemanni) is a popular choice and generally a reef-safe option. Fish species include the Copperband Butterflyfish and a few species of Filefish. Unfortunately many are not reef safe or have specialised diets that make them unsuitable for long term aquarium care. 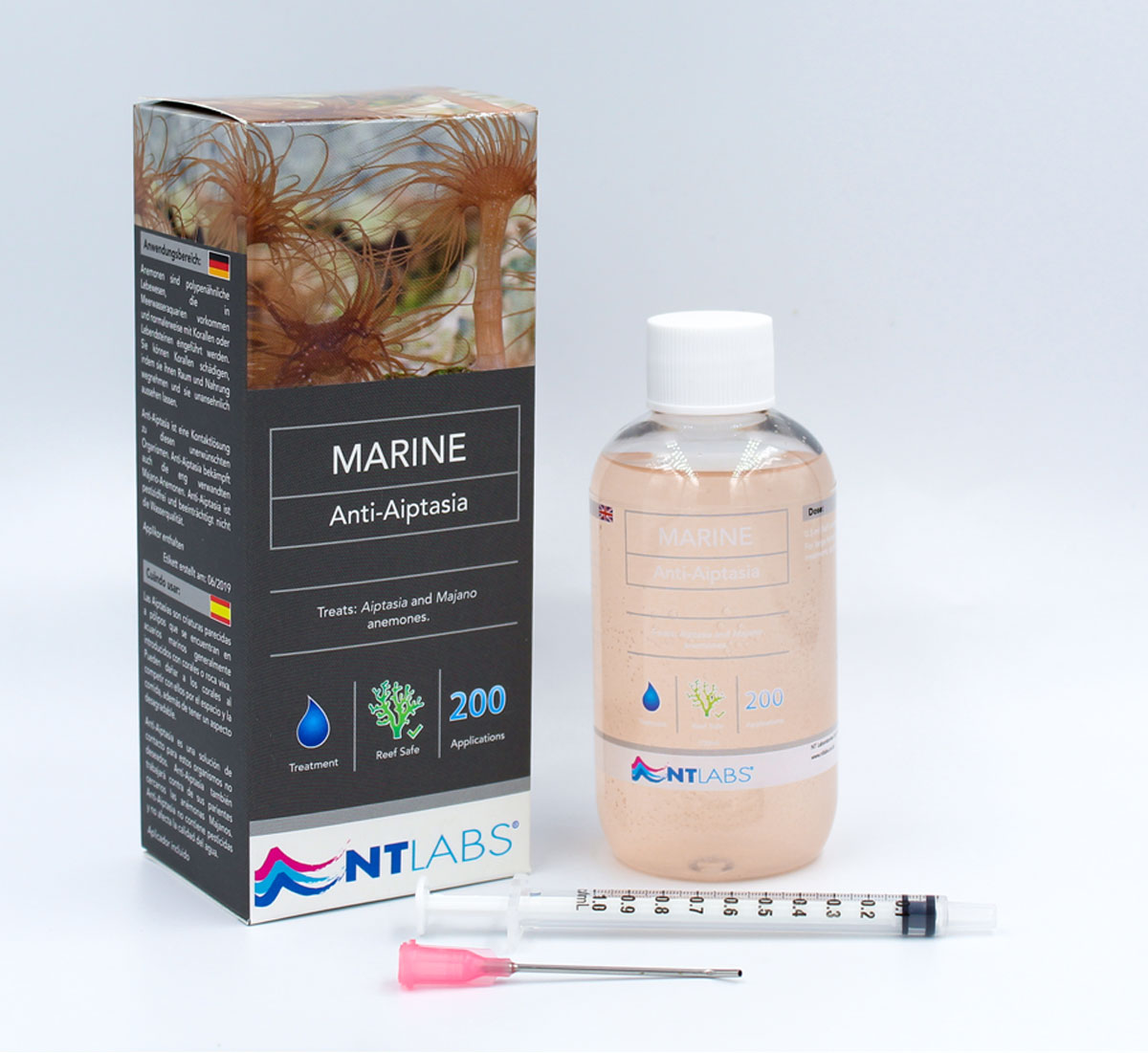 Chemical solutions are considered the best way to control Aiptasia outbreaks. If used in the correct way, they are completely safe for the reef aquarium. The recent addition of Anti-Aiptasia to the NT Labs Marine range provides a safe way to eradicate unwanted Aiptasia. The 100ml bottle is suitable for up to 200 applications and includes a measuring syringe and an angled tip for the harder to reach pests. Deploy the Anti-Aiptasia treatment near the mouth of the anemone and it should react by withdrawing its body. Death is then imminent and does not need further intervention. Be mindful if treating many Aiptasia in one cycle, it can cause water quality issues. Dying Aiptasia will release ammonia into the water, so it is recommended to only treat a few Aiptasia at a time, targeting the larger ones first. This will reduce the chances of sexual reproduction in the aquarium and increases the chance of breaking the cycle. There is no need to remove dead Aiptasia - they should disintegrate into the water column and removed by the protein skimmer.