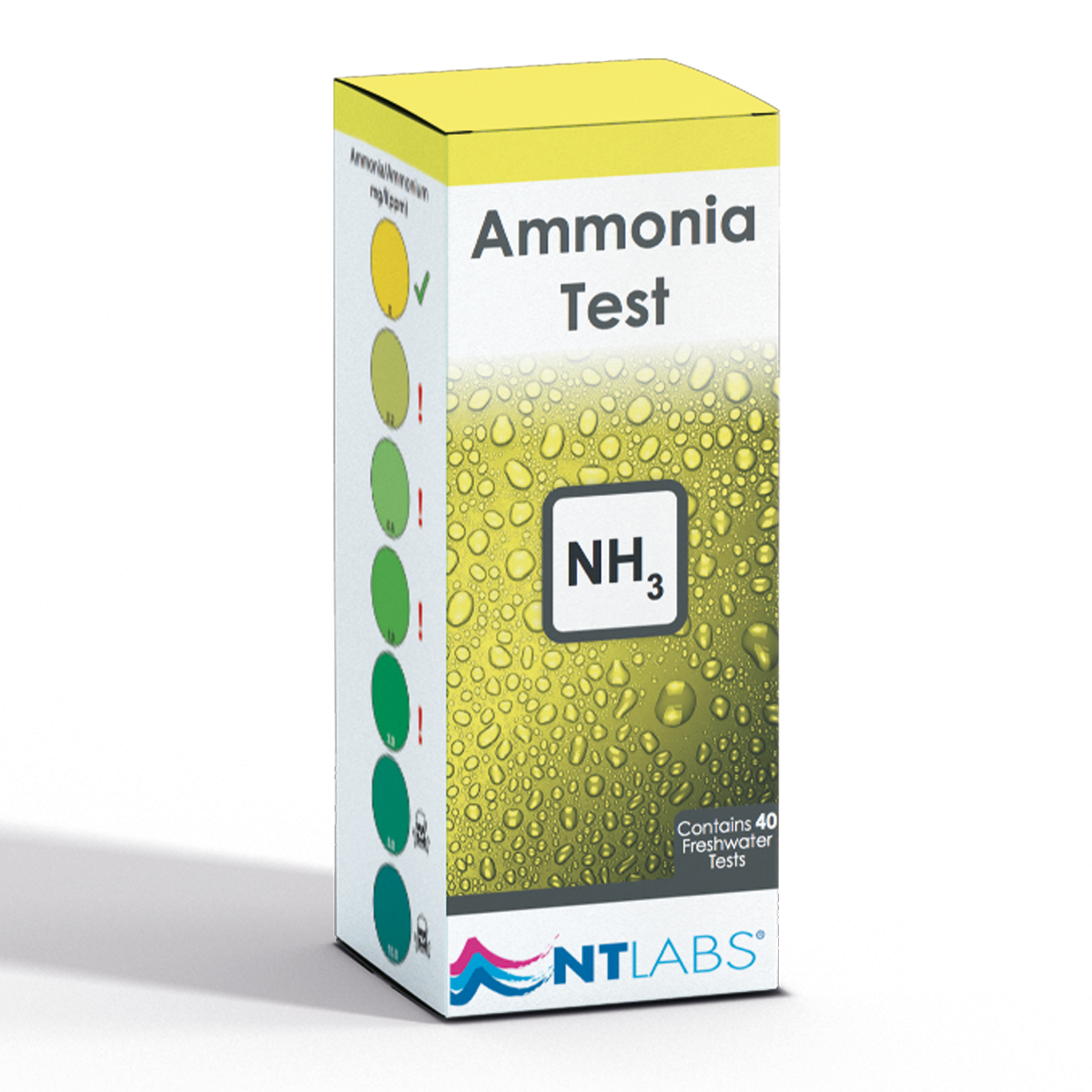 Ammonia is a waste product released by fish through their gills and excrement. It is toxic even at very low levels in the aquarium and its removal is the primary purpose of an aquarium filter. Bacteria colonise the filter media and consume ammonia converting it into nitrite and then nitrate. These steps make up part of what’s known as the nitrogen cycle.

Why is ammonia dangerous?

Ammonia is a poison - it is a waste product produced by fish during normal metabolism. Like any waste product, it must be removed through excretion to avoid poisoning the body. All living organisms on this planet perform excretion – in fact it’s one of the defining characteristics of life. Fish are no different.  In most natural habitats, any ammonia produced by fish is immediately diluted by the large volume of water surrounding the fish, but in an aquarium, things are slightly different. Over time, ammonia levels can rise and become toxic - firstly affecting the fish’s gills, then the fins, and finally their organs. It creates a burning sensation and the fish exhibit clear signs of distress. The effects of ammonia poisoning can be long lasting, but if caught early enough, some effects are readily resolved once water quality improves.

Ammonia and NTS, and why it might rise in mature systems

Understanding how the nitrogen cycle works and its ability to convert ammonia into nitrite and nitrate, it is easy to understand why ammonia is often present during the initial set up of an aquarium. New tank syndrome (NTS) is a common condition in new setups where the production of ammonia exceeds the capacity of the filter to be able to break it down. It is usually caused by introducing too many fish at once to an immature aquarium but can also occur at any time due to a filter crash. Such filter crashes can be triggered by changing too much filter media at once, to a power cut or a medicine overdose. Bacterial supplements such as Filter Starter is a great way to ‘kick start’ the aquarium filter and help prevent NTS from occurring.

The relationship between ammonia and pH, NH3 vs NH4+, and which one is dangerous? 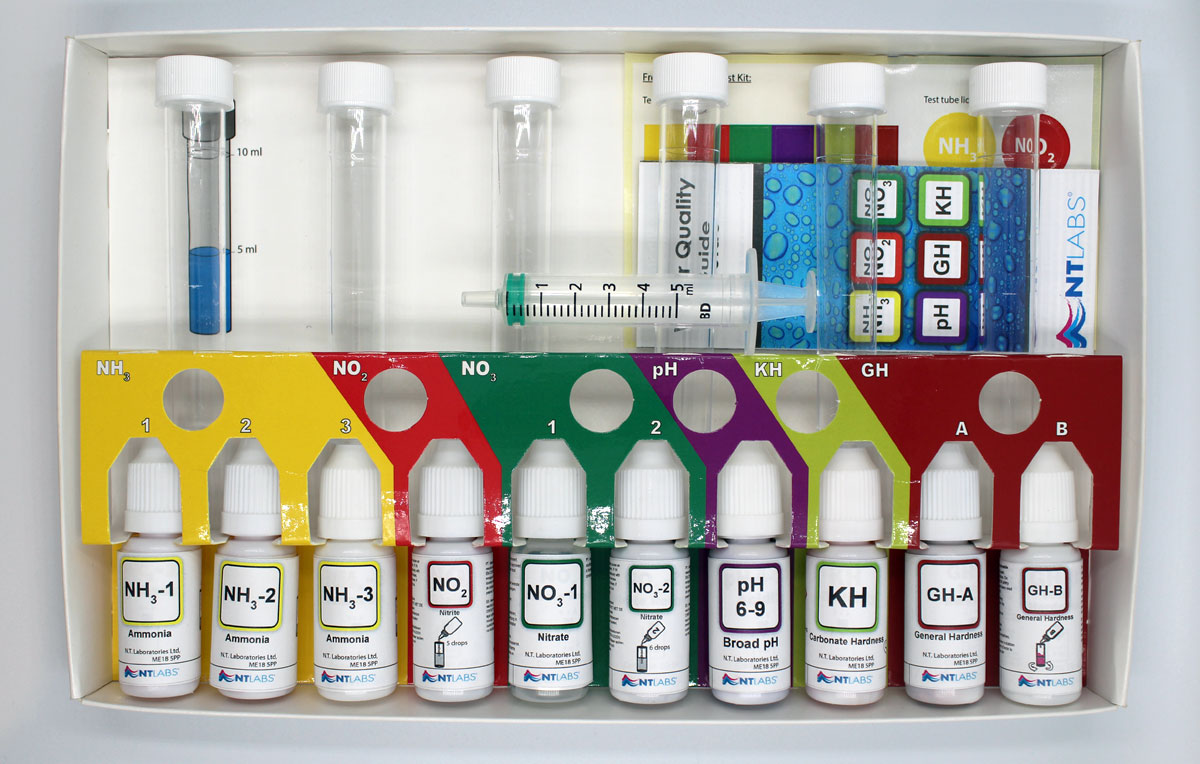 Ammonia is often written in its chemical abbreviation of NH3 (1 nitrogen atom and 3 hydrogen atoms). This is the toxic form of ammonia that we need to be principally concerned with. There is another similar compound, NH4+, which is called ammonium. This has an extra hydrogen atom and is a positively charged, ionised variant of ammonia, and is effectively non-toxic to aquatic organisms. Both NH3 and NH4+ together are called the total ammonia nitrogen (TAN). When using an ammonia test kit, it is measuring the TAN level of ammonia.

It is important to understand how ammonia behaves in different ways depending on water conditions. When the pH is low (acidic) ammonia is present in the non-toxic ammonium NH4+ form. When pH is high (alkaline) ammonia is converted in to the toxic NH3 form. It is therefore important to also know the pH value of the water when testing for ammonia. In neutral water (pH of 7.0), ammonia is mainly present as the non-toxic NH4+, whereas in marine aquariums (pH 8.0 or higher) the proportion of NH3 increases. Therefore, even very low levels of ammonia are toxic in marine aquariums.

How to remove ammonia - biological vs chemical removal

As mentioned, the best method for ammonia removal is through the natural process of the nitrogen cycle. A healthy filter is capable of rapid ammonia removal and levels should remain at or very close to 0 mg/l once the aquarium is fully cycled. If ammonia levels rise, adding Filter Starter bacterial supplement will quickly increase bacterial levels and reduce the ammonia.

Ammonia can also be removed chemically. Chemical filtration is often a quicker way to remove ammonia if an emergency arises. Ammonia Remover is a zeolite-based medium that absorbs ammonia via ionic exchange. As it absorbs ammonia, it releases either a non-toxic sodium or potassium ion. Zeolite has a high absorption capacity and only needs replacing once ‘full’. In a mature, healthy aquarium, zeolite could therefore take months to reach its capacity. Because there are no noticeable cues when it’s full, it’s best to replace Ammonia Remover every 2 to 3 months before ammonia has a chance to increase.

Nitrite is the second stage compound of the nitrification process. It's derived of one nitrogen atom and two oxygen atoms (NO2) and is created after bacteria in the biological filter breaks down ammonia (NH3). It is less toxic than ammonia but is still dangerous to fish in high concentrations.

Why is nitrite dangerous? 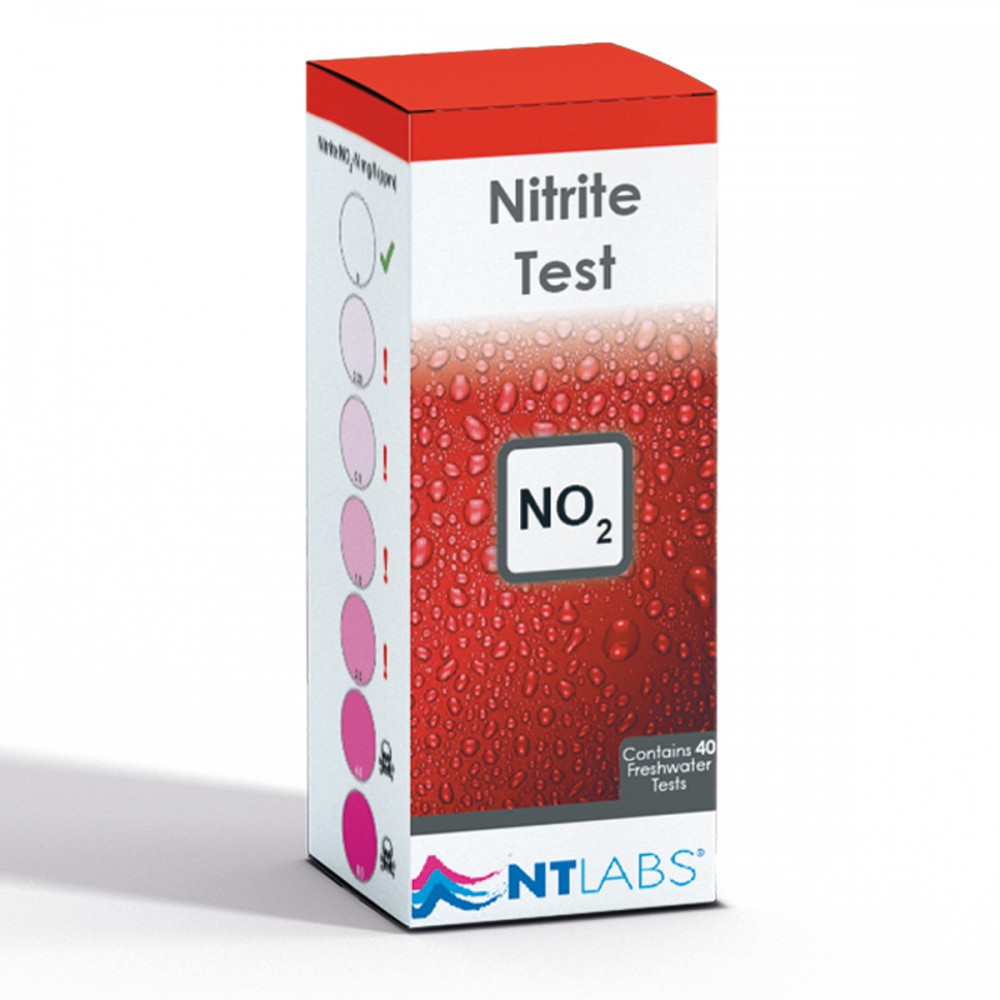 Nitrite, on a molecular level, looks very similar to an oxygen molecule. Dissolved oxygen in the water enters the fish’s bloodstream through their gills. Oxygen, once inside the blood, becomes attached to a specialised protein called haemoglobin. If the nitrite concentration becomes too high, haemoglobin can mistakenly bind a nitrite molecule instead of oxygen.The affinity between a nitrite molecule and haemoglobin is much stronger than that with oxygen, and subsequently, the nitrite is permanently associated with haemoglobin. This prevents the haemoglobin protein from being able to pick up oxygen in the normal manner. A classic symptom of ‘nitrite poisoning’ is the fish hanging at the surface of the water struggling to breath. Knowing this symptom is important because it could be mistaken for low oxygen in the water, and because the blood is impaired, increasing oxygenation is unlikely to remedy the problem.  Another symptom is that the blood changes from the usual bright red to a chocolate brown (brown blood disease) as the nitrite oxidises the iron inside haemoglobin. Although ‘oxidisation’ might sound very scientific, the truth is we see it every day - rusty iron goes a similar shade of brown!

The most effective way of reducing nitrite is by having excellent biological filtration. The bacterial colonies that live in aquarium filters that consume ammonia also live alongside bacteria that can convert nitrite into nitrate. As is the case with ammonia consuming bacteria, these take time to culture and will not be able to convert all nitrite to nitrate immediately. Adding Filter Starter will speed up this process as it ‘kick starts’ the nitrification process whilst the natural bacterial colonies cultivate.

Salt is also a proven method of reducing the toxicity of nitrite. By adding a small amount of Tonic Salt at the rate of 1 g per litre of aquarium water, it can prevent nitrite crossing the gill membrane and having its toxic effect on the blood. This same mechanism of preventing nitrite toxicity also occurs in marine fish, and due to the sea water, marine fish are almost immune to nitrite! One thing to remember is that not all freshwater fish tolerate salt, so make sure you know whether the species you own can tolerate it. 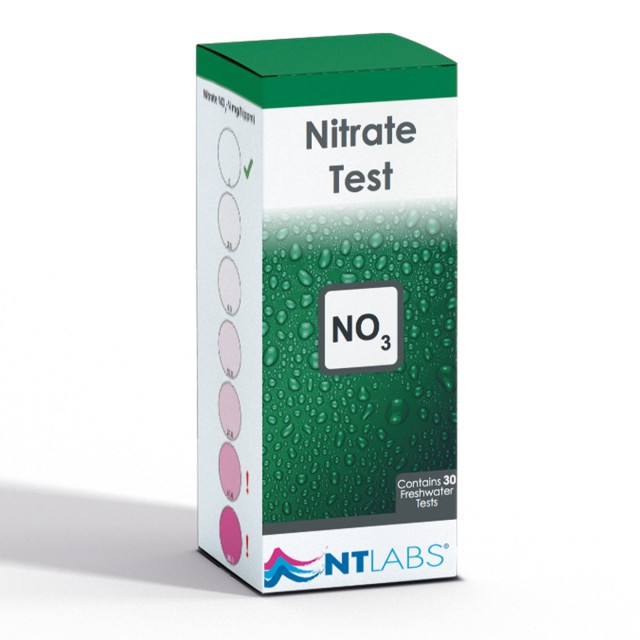 What is nitrate? Is it dangerous?

Nitrate is the final stage of nitrification in the nitrogen cycle in aquariums and comprises of a single nitrogen atom and three oxygen atoms (NO3). It is not particularly harmful to aquatic species, but some may show signs of toxicity when nitrate concentration exceeds 80-100 mg/l. Nitrate is essential to plant growth in aquariums. If the aquarium doesn't contain plants or recommended levels are exceeded, nuisance algae can become a problem.

How to remove nitrate - water changes vs aquarium plants vs biologically

Nitrate cannot usually be consumed by the typical filter bacteria and so levels rise over time. Regular water changes dilute the nitrate levels back to recommended levels. Nitrates will very rarely reach zero as even freshly dechlorinated tap water still has variable amounts of nitrate present, dependant on your location in the country. Therefore, it’s always a good idea to know how much nitrate is in your tap water as well as your aquarium.

In areas of good water movement, oxygenation and high surface area, such as the filter, aerobic bacteria use oxygen to work on ammonia and nitrite. Conversely, in areas of low oxygenation, such as within the substrate or gravel of the aquarium, anaerobic (literally means “life without air”) bacteria can extract the oxygen atoms in nitrate for their oxygen source and excrete nitrogen gas or other nitrogen compounds (albeit, sometimes harmful compounds) as waste products. This process, called denitrification completes one path of the nitrogen cycle. Such environments can be hard to encourage, and specialised filters that rely on this principle should only be carried out with frequent water quality monitoring. 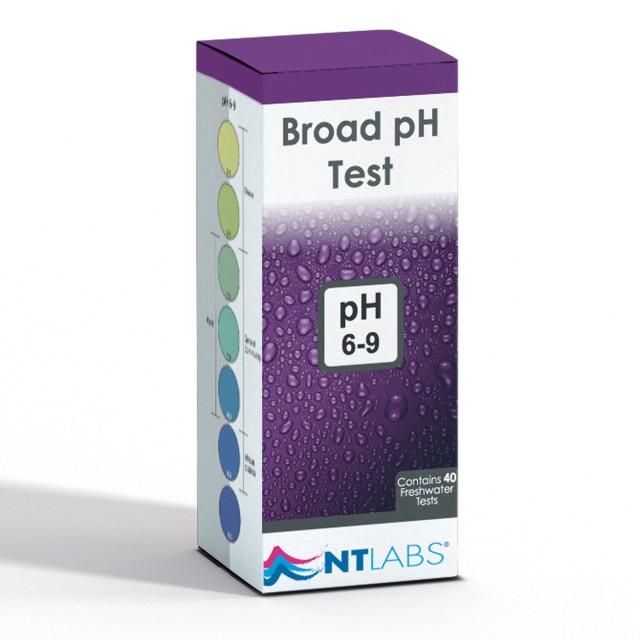 These 3 aquarium lab tests are important in their own rights but are intrinsically linked and so should be discussed together.

The pH is the measure of how acid or alkaline a substance is. It is a logarithmic scale of 0 to 14, where 0 is very acidic and 14 is very alkaline. In most freshwater aquarium conditions, a neutral pH of 7.0 is favoured, but some specialised environments vary. Acidophilic (acid loving) species from South America or Asia such as Apistogramma, discus and gouramis will prefer a lower pH from 5.0 - 6.5. African cichlids from the Great Rift Lakes, such as Malawi, Tanganyika and Victoria, tend towards higher pHs.

KH (Carbonate Hardness) is the measure of carbonates and bicarbonates present in the water. These ‘buffering agents’ act as a pH stabiliser - the higher the KH value, the less chance pH has of fluctuating throughout the day. Generally speaking, in acidic conditions KH is lower than in alkaline waters. For general community aquariums, a KH value of 6 dKH is ideal for optimal buffering capacity.

GH (General Hardness) is the measurement of calcium and magnesium in the water. Aquarium water is often described as being hard or soft. Hard water is generally associated with alkaline environments and soft water being more acidic. A GH value of around 8 dGH maintains the optimal levels of minerals without becoming too ‘hard’ or ‘soft’. Some species can be particularly fussy about the GH, and where possible, it’s best to try to match the GH to their requirements.  For example, many South American species prefer low general hardness, and like KH, Rift Valley cichlids from Africa enjoy more minerals in the water.

What is the relationship between pH, KH and GH? 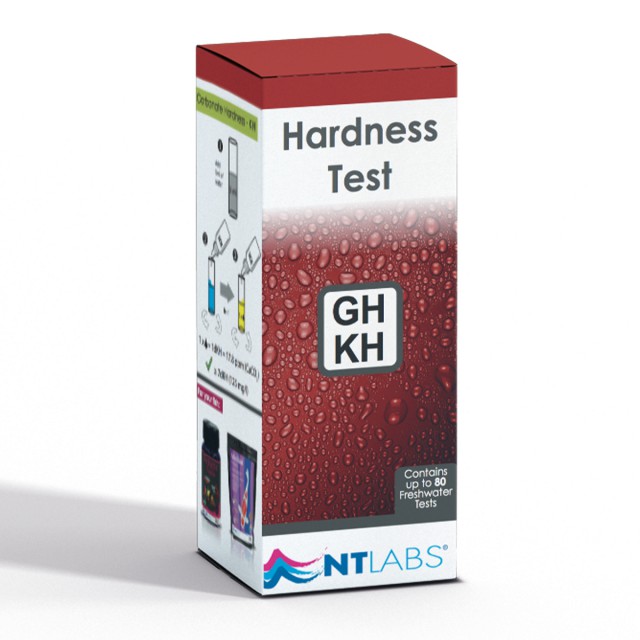 As previously mentioned, KH acts as a stabiliser for pH - meaning the higher the KH value, the more stable the pH will remain. Fluctuations in pH can have serious detrimental effects on fish. It is important to understand the pH scale is logarithmic. The difference between a pH of 5 and 4 is ten times more acidic, whilst the difference between 5 and 3 is one hundred times more acidic.  Because of this scale,  apparently small numerical changes in the pH level can be extremely dangerous and stressful to fish. To maintain a stable pH, it is important to monitor KH and prevent it from getting too low. KH Up - pH Stabiliser will raise KH levels and retain pH.

GH and KH together is the ‘Water Hardness’ but it is useful to understand they act independently from each other. KH is the measurement of carbonates and bicarbonates whilst GH is calcium and magnesium molecules. Using a product to raise KH may not have an impact on GH levels and likewise GH targeting products may not affect KH. Some ‘hardness increasing’ products on the market may use calcium bicarbonate which will raise both KH and GH. Unless trying to recreate certain natural environments, most fish species will be happy with a pH value of 7.0, KH of 6 dKH and GH of 8 dGH.