Nitrogen is essential to life

This substance finds its uses in all parts of biology; from muscles to allow movement, the DNA blueprint for building cells, to the molecular machinery known as enzymes for carrying out the fundamental biological processes of life. The role of nitrogen in fishkeeping is equally significant, for it happens to be our friend when it comes to feeding our fish and keeping them healthy, but it can also be our enemy with respect to water quality.

Nitrogen rarely stays in the same place for long. Instead, it flows from one organism to another starting with plants, which are then consumed by herbivores, herbivores by carnivores and so forth. At each step, some nitrogen is assimilated by the organism to build proteins, while some is released as waste. From here, it can be reworked into forms of nitrogen that plants can utilise, completing the nitrogen cycle. However, it is the stage between fish waste and plant food, called nitrification, that is of most concern to fish keepers.

Many of us will be familiar with this process that occurs in our filters.  We might have seen the words “ammonia”, “ammonium”, “nitrite” and “nitrate”, as well as their representative chemical symbols: NH3 NH4+, NO2 and NO3. So let’s delve a little further into these and get a better understanding… 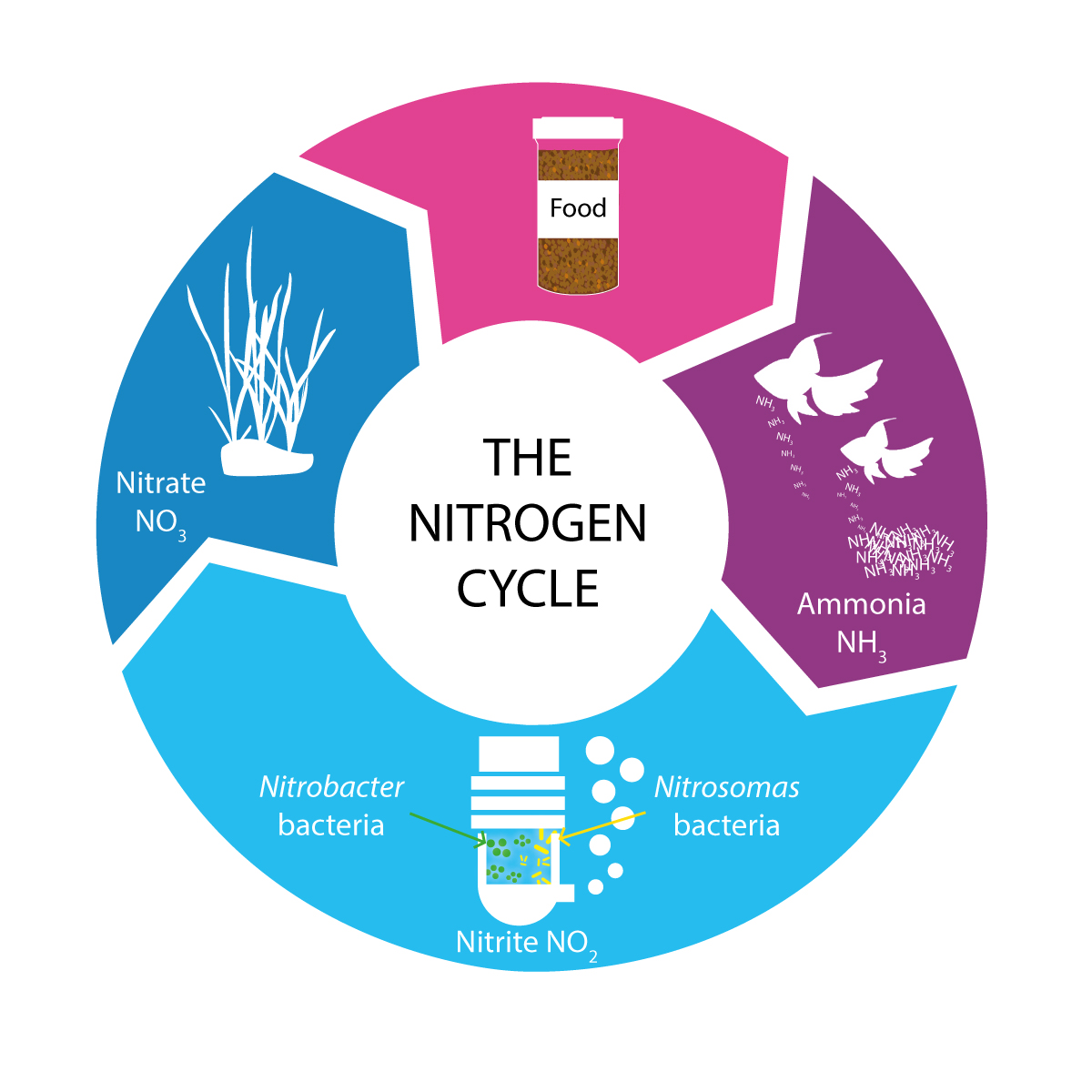 Ammonia (NH3) is a toxic gas composed of nitrogen and hydrogen produced by the decomposition of organic matter (fish waste, plants and uneaten food) in the first phase of the nitrification. With the support of nitrifying bacteria (namely, species of Nitrosomonas), harmful ammonia turns into less toxic nitrite.

Ammonia or Ammonium?
Ammonia (NH3) is a gas, and like other gasses such as oxygen, it can dissolve in water. When ammonia dissolves in water, depending on whether the water is acidic or alkaline, ammonia can change slightly to become ammonium.  It’s a small change, but it means the difference between being toxic or not. The transformation of ammonia NH3 (toxic) into ammonium NH4+ (an ionic form of ammonia) is directly dependent on the pH value of the water:

It is therefore very important to check the ammonia concentration and pH of the water, especially in the initial phase of an aquarium to confirm that the life cycle is off to a good start. The easiest way to check your ammonia levels is with our Aquarium Ammonia Test Kit. The ammonia level should always be zero although it will spike during the initial set-up, you should aim to keep it below 0.25 mg/L even at this stage especially if your pH is above 7.

What to do if you have high ammonia?

NO2 (nitrite): The Second Stage of the Nitrification:

In a well-established cycle, harmful nitrite is produced by the bacterial processing of ammonia, but is then subsequently converted into non-toxic nitrate ion through Nitrospira and Nitrobacter bacteria.
A significant level of nitrites in a tank is detrimental to the fish and plants of an aquarium, and is evidence that the biological balance is either disrupted or has not yet fully established. It is therefore very important to regularly check the concentration of nitrite, particularly during the first two months of the start-up phase of an aquarium.

In a balanced aquarium, even a slight increase in the concentration of nitrite should be taken very seriously; it indicates a break in the cycle and should be investigated immediately.
The easiest way to monitor your nitrite level is with our Aquarium Nitrite Test Kit. As with ammonia, nitrite should be zero in an established aquarium. The toxicity threshold not to be exceeded is 0.25 mg/L, and fatal short-term threshold is 3 mg/L.

What should be done if the nitrite concentration is too high?

NO3 (nitrate): The Final Stage of Nitrification:

Produced by the breakdown of nitrite by Nitrobacter and Nitrospira bacteria, the presence of nitrate in the water analysis is the result of a proper functioning of the biological waste regeneration system in the aquarium.

Non-toxic at low doses and actually beneficial to plants as a fertilizer, the concentration of nitrate in an aquarium is constantly increased by the process of the nitrification process and will always tend to increase. The generally accepted nitrate level for an aquarium is a maximum of 50 mg/L. Concentrations greater than this can lead to reduced fish growth and can encourage the growth of unsightly algae.

There are 3 simple rules for properly managing nitrates in the aquarium:

What should be done if the nitrate concentration is too high?

Note: if the concentration of nitrate is very high (more than 150mg/L), gradually change the water in the aquarium over several days (never more than 30% of the aquarium volume at a time) and continue until the nitrate level is back to reasonable values (below 50 mg/L), it may be a good idea to treat the aquarium with Aquarium Cleaner which is designed to digest organic material which may have built up over time in an aquarium resulting in high nitrate levels.

Aquarium water filtration is often taken for granted. A filter works tirelessly around the clock to provide a perfect environment for beneficial bacteria to continually break down harmful fish waste into much less harmful nitrate. Primary removal is through water changes, but there are other novel methods for its removals. One explores the use of yet another type of bacteria that can convert nitrate back into nitrogen gas in a process called “denitrification”. However, such bacteria require a dramatically different environment from our usual filtration bacteria, requiring the absence of oxygen. Some aquaria may have small populations of these bacteria within deep gravel beds, but it is hard and potentially dangerous to rely on these bacteria for nitrate removal.

As we have seen, nitrogen plays a significant role in fish keeping. While, depending on it’s form, can be our greatest enemy, but with careful controlling and monitoring, it’s a key ingredient into making our hobby possible!