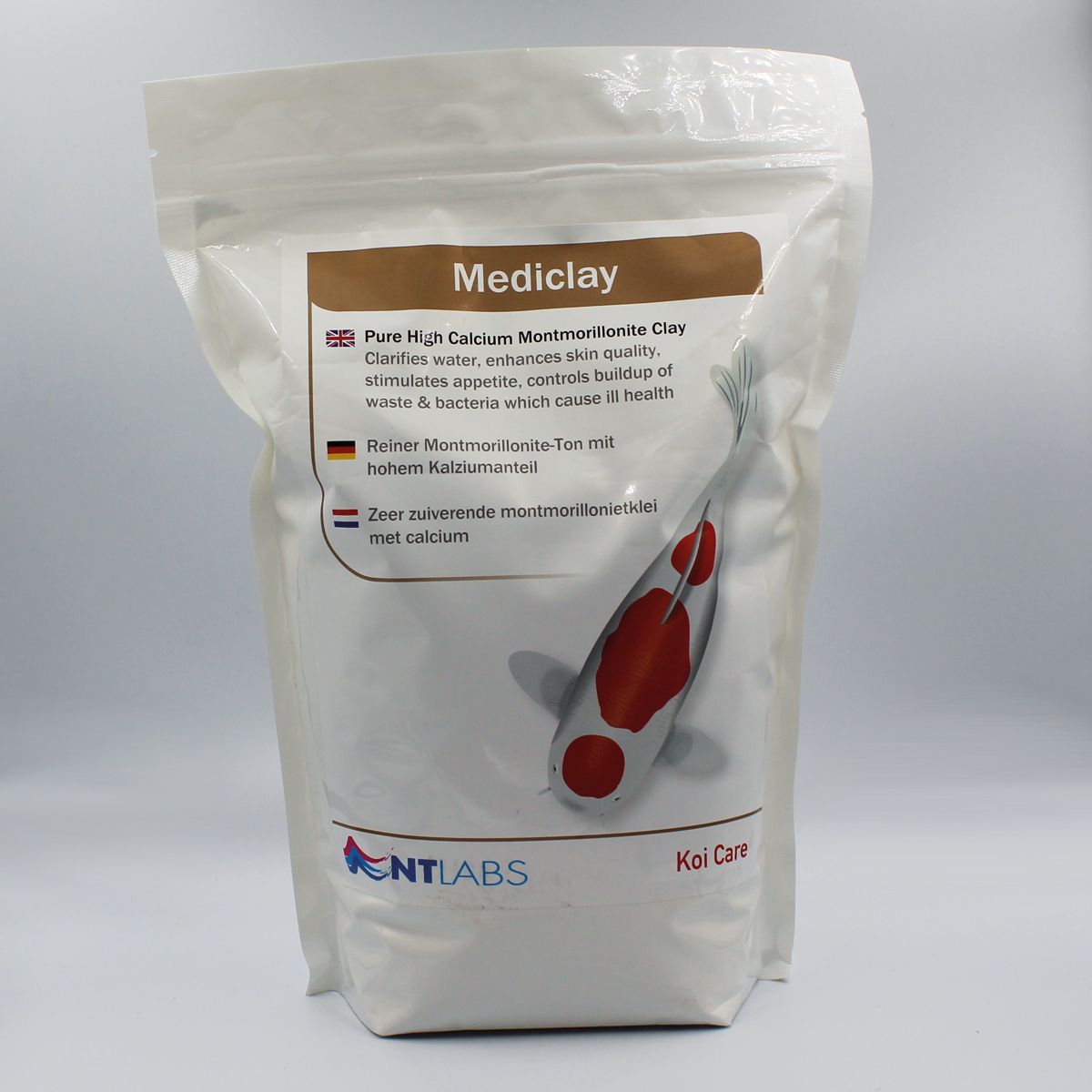 Clay has been used for centuries in water bodies due to its “magical” properties. These properties aren’t quite magical, and this article breaks down some of the tougher science to examine how clays, such as Mediclay, do what they do and why they are so effective.

Clay ions are negatively charged and arranged in sheets which sit on top of one another. This means they are able to attract positively charged ions, such as ammonium and heavy metal ions. These molecules then form ionic bonds, locking the harmful ions away so they cannot cause damage to fish or the filter bacteria. Compared to other clay particles, the gaps between the sheets of atoms in montmorillonite clay are much bigger, which increases the surface area and allows more harmful ions to be absorbed per particle of clay.

The particle size of Mediclay is very small. However, compared to other particles in the water which make the water appear cloudy, the size of clay is very large. As a result, these tiny, particles are drawn to the larger clay molecules and are dragged down to the bottom of the pond as the clay slowly sinks, clearing the water. In this way, Mediclay acts a flocculant (it causes particles to clump together). Additionally, as Mediclay is such a fine powder, the particles are in suspension for a longer period of time, allowing them to gather more particles before they reach the bottom of the pond.

After the Mediclay particles have sunk to the bottom of the pond, many fish will nibble and ingest clay particles. As these particles work their way through the digestive tract, they will bind to positively charged impurities and encapsulate them. These will then be discarded by the fish within their waste, and can then be picked up by the filter and removed. Similarly, there is anecdotal evidence which suggests that any free-swimming or suspended pathogenic bacteria or parasites are encapsulated by clay particles in a similar way and effectively neutralised. This prevents these pathogens from attacking fish, helping to maintain the health of the fish in your pond. Additionally, Mediclay contains a variety of essential trace elements and minerals which fish can only gather from their diet, which help to keep your fish healthy.

Mediclay contains carbonates and a variety of trace elements which are essential for plants and bacteria. Carbonates are used by the nitrifying filter bacteria to detoxify ammonia and turn it to nitrite and subsequently nitrate. By adding additional carbonates to the water, the filter bacteria can more efficiently and quickly break down ammonia and nitrite produced by fish waste and change it into non-toxic nitrate which will not harm fish.

Mediclay contains calcium, a mineral vital for the action of enzymes to take place. In fact, calcium acts as a catalyst for enzyme action, so the addition of Mediclay increases enzyme activity, resulting in food being digested more thoroughly and faster by your fish. This reduces waste and maximises nutrient uptake by your fish, and in turn, stimulates the appetites of fish to gain more of these nutrients.

It is most likely that this boost is caused by the uptake of more nutrients from the fish’s diet as well as the addition of essential trace elements and minerals to the fish’s diet. Why not try it for yourself and see if your fish’s colours improve? Do let us know!

The ancestors of koi are naturally found in clay-rich, muddy ponds, so it’s no wonder they appreciate the addition of clay so much. It may be the difference between the koi merely surviving in your pond and thriving in it, so why not add some clay to your pond?

You can find out more about Koi Care Mediclay on the Mediclay product page, including FAQs, general usage instructions and a handy Dosage Calculator.